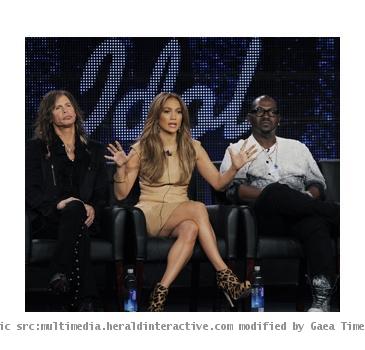 LOS ANGELES (GaeaTimes.com)- “American Idol” Season 10 would premiere tonight on WFXT (Ch. 25). However, this season would bring about some alterations. The three popular judges, who have been judging the contestants in the last few seasons, namely, Simon Cowell, Kara DioGuardi and Ellen DeGeneres (was in the panel of judges only for season 9) will not make it in the judges panel this time. Instead, they would be substituted by Steven Tyler, the front-man of Aerosmith and singer/actress Jennifer Lopez.

However, “American Idol” season 10 will also focus less on the “McSoulful singer-songwriter” contestants. This season would like to concentrate more on young singers, who would not be allowed to use their own instruments in the show. The “American Idol” season 10 will focus completely on the voice quality and music of these young contestants. Executive producer of the show, Nigel Lythgoe felt that the previous contestants, who appeared on stage with their own instruments, to play their self composed music, were more like a “bunch of strummers” than guitarists or musicians, who wanted to hide their voice behind their instruments and that is what they do not want this time. They producers of the show have also decided that they would avoid the participation of older contestants above 30. Instead they would encourage younger people within the age of 15.

However, many people said that will these young contestant be able to handle the pressure of the “American Idol” contest. Nigel Lythgoe said that so far, the contestants have been extremely good and he strongly feels that would be able to perform well under the pressure too. Both the judges are extremely happy to mentor these contestants, and at the same time, would make their judgment more genuine, rather than commercialize them.