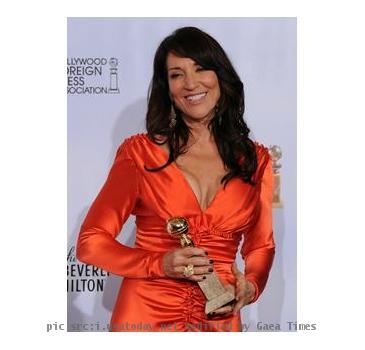 BEVERLY HILLS (GaeaTimes.com)- Katey Sagal won the Golden Globe Award for the Best performance in a television drama series category, for her role in “Son Of Anarchy”, where she plays a tyrannical matriarch. As her real self is very different from the character she portrays, in the series, playing this role with full conviction was not less than a challenge for the actress. On that note, winning this award was well deserving for her.

Katey Sagal was wearing an orange dress, while she went up on the stage to receive the award. The dress was well covered with full sleeves and a scooped neck. She sported a long hanging golden earring, that got well coordinated with the color of her dress. However, she had no other options but to look good, as being the best television actress is definitely not just about acting. She thanked her husband Kurt Sutter, who also happens to be the creator of the show. She said that she loves him a lot and is extremely proud to have him as her boss. According to her working with her husband all the time is better than anything else. In the back stage, she further added that this award is not just an honor for her, but also the entire show. However, she gave the entire credit to her husband, who she said is extremely delighted with her achievement in the award ceremony. She added that she wants to give this award to him and wants to see what he does with it.

Before the award ceremony started, Katey Sagal stated that she has done a lot of comedy roles, but this time she wanted to do something different. That is why, she chose to act in this drama. She described her character back stage as ‘A bit Political…. a bit royal and a bit…..” she paused.

Author STEPHEN KING has landed a role in one of his favourite TV dramas after letting producers know...

Sagal Was One Of Gene Simmons' Conquests

Former MARRIED... WITH CHILDREN star KATEY SAGAL has revealed she is one of the thousands of women K...

Katey Sagal is shining in the darkness of her gritty motorcycle drama, 'Sons of Anarchy'

Katey Sagal: Happy as the mom on 'Sons of Anarchy'NEW YORK — Season two of the FX drama "Sons of A...