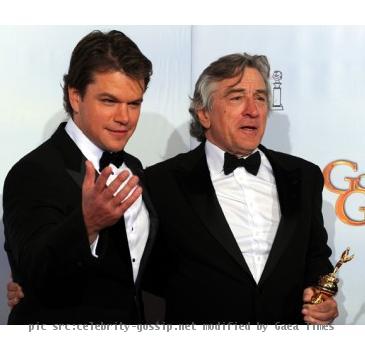 BEVERLY HILLS (GaeaTimes.com)- Notable actor Robert De Niro, who is considered as one of the best actors of his generation received the distinguished Cecil B. DeMille Award for lifetime achievement in the field of motion pictures on Golden Globe Awards function last night. The academy award-winning actor previously earned four nominations for his extraordinary contribution in movies like “New York, New York”, “Meet the Parents”, “Midnight Run” and “Analyze This”. However, last night, the show organizers and jury of 68th Golden Globe Awards paid their tribute to the actor, for his relentless effort and commendable performances in the movies for so many decades.

Last night, it seems that the “Taxi Driver” actor was in full mood to make fun of himself and his contemporaries, though in a light hearted spirit. Robert De Niro made sure that he does not talk about his accomplishments in his highly acclaimed movies but he made fun about his less acclaimed movies like “Jacknife”, “Frankenstein”, to name a few. However, the actor said that all his movies are like his own children. The notable actor thanked all the show organizers and the jury for giving him the Lifetime Achievement Award though he mentioned that he would continue to entertain audience with his acting prowess.

When actor Matt Damon gave him the award, the audience of gave him a standing ovation to honor his dedication and effort in the industry. Robert De Niro left no stones unturned to parody the contemporary incidents happening all over the country. In his acceptance speech, he spoke about TSA body scan, sultry actress Megan Fox and also Javier Bardem and made fun of all of them.

LONDON - A revolutionary technique that could restore sight to the blind and prevent others from los...
Copyright© 2011 The Gaea Times