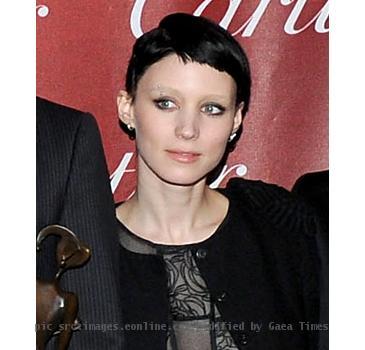 LOS ANGELES (GaeaTimes.com)- It seems that American actress Rooney Mara has gone into a complete transformation for her role in “The Girl with the Dragon Tattoo”. The actress was kept hiding for about four months by the director David Fincher to increase the curiosity of the fans. However, on Monday, the actress made her first public appearance at the Palm Springs International Film Festival Awards Gala and the onlookers saw her complete image makeover for the role of Lisbeth Salander in the upcoming movie.

Rooney Mara seemed to have shed her innocent girl look with her bleached eyebrows, black chopped hair and multiple earrings. Even the February issue of a reputed media outlet saw her in the guise of her character Lisbeth Salander with dark make up and tattoos, Rooney Mara looked far cry from the blonde of “The Social Network”. In the With her unevenly chopped black hair, bleached eyebrows and multiple piercings, actress Rooney Mara looks a far cry from the fresh faced girl who starred in hit film “The Social Network”. In the gala event the actress looked elegant in her black knee length and high heels.

'Rooney knew he had made a mistake,' says Fergie of contract dispute

LONDON - Star striker Wayne Rooney knew that he had made a mistake when he took on the management of...

Rooney's 'Auld Slapper' hooker denies having sex with him