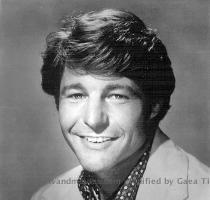 LOS ANGELES (GaeaTimes.com)- Fans of “The Adventures of Ozzie and Harriet” show got heart broken after the news of the popular show’s last remaining face David Nelson’s death surfaced on Tuesday. Dale Olson, a spokesperson for the Nelsons and a Hollywood publicist announced that the star had died on Tuesday as a result of colon cancer. The actor passed away at the age of 74. David Nelson is survived by his wife Yvonne, four sons, his daughter and seven grandchildren.

The actor who was a popular face on television starred in “The Adventures of Ozzie and Harriet” along with his family. Audience witnessed the actor appearing on the series along with his mother, father and brother that used to air on ABC from 1952 to 1966. The show had become an immediate success drawing the warm response of the audience. One of the chief reasons behind the success of the show was the story line of the show. On various occasions the story lines would be based on on the lives of the stars which not being so common in these days that gone to achieve a tremendous success. Along with “The Adventures of Ozzie and Harriet” had David Nelson not only starring in it but, the actor also tried his hand at direction by directing several episodes of the show.

David Nelson had been battling with the fretful disease for a long time before ultimately giving away to it on Tuesday. The memorial service for the actor will be held on Thursday at Pierce Brothers in Westwood Mortuary. Apart from starring in the popular show, David Nelson had also made achievements in the film arena. he had acted in films like “Peyton Place” and “The Big Circus”. The actor was even received a star on the Hollywood Walk of Fame.

NEW DELHI - Britain's Defence Secretary Liam Fox has said that the perpetrators of the 2008 Mumbai t...
Copyright© 2011 The Gaea Times