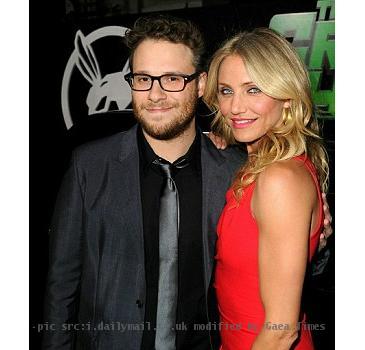 LOS ANGELES (GaeaTimes.com)- Superhero movie, “The Green Hornet” is all set to hit the silver screen on next Friday. On Monday, the powerhouse star cast of the movie appeared on the premiere of the film in Grauman’s Chinese theater and walked the red carpet with elan. Actress Cameron Diaz was the show stealer of the evening and she looked ravishing in her red dress and beige high heels. The highly anticipated movie is directed by Michel Gondrya and the screenplay is co-written by Seth Rogen and Evan Goldberg.

In one of his previous interviews, Seth Rogen said that he and Evan Goldberg were inspired by the character of Paris Hilton while penning down the character of the protagonist! On Monday, during the premiere of the movie, Cameron Diaz said that he television show “The Green Hornet“. However, the gorgeous actress added that the director told her that he is making his own new version of the original series. The actress was recently photographed with her boyfriend Alex Rodriguez in Mexico. While speaking about it, the actress said that she feels that it the “rudest” thing to take a picture of anyone in bikini and she does not approve it at all.

Cameron Diaz showed off her trim figure at the premiere of “The Green Hornet“. The movie will be released in 3D version all over the world and it has received rave reviews from its viewers. The gala premiere witnessed all the actors of the movie in their best attires to look picture perfect for the evening. Taiwan-born Chou, 31 looked handsome in his all black attire. Actor Edward Furlong arrived in a casual outfit. The other celebs, who attended the premiere are Sara Rue, Sophia Bush, Seth Rogen, to name a few.