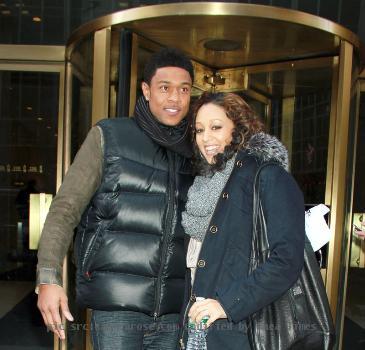 LOS ANGELES (GaeaTimes.com)- One of the twins of the popular sitcom show, “Sister, Sister” Tia Mowry, is pregnant with her first child. She and her 31 year old husband, Cory Hardrict, were married in 2008, in Santa Barbara, California. Sources said that the couple is expecting the baby in July.

A source closer to the couple said, this is something that Tia Mowry and her husband have been wanting for a long time, and now they are more than thrilled. Even the dusky actress told a reputed source that both of them are extremely excited to be parents, as they wanted to have a kid for a long time. However, the lady is still quite thin, and the baby bumps are not so visible yet. However, despite her pregnancy, the lady still signed a new show, “The Game” with BET. She and her husband, appeared on the PIX11 Morning News, to promote this show. However, people spotted a remarkable change in her feature, as the dark beauty has turned fair all of a sudden. Many people are under the impression that this transformation is a result of her pregnancy glow, while others feel that it is the result of bleaching. Nevertheless, she looked extremely happy and beautiful, when she sported her high boots, a gray scarf, a white top and a navy blue jacket to promote the event.

However, with her personal life to be blessed with the bliss of her first motherhood, her career also seems to be on a role these days. Tia Mowry will be featured in the Broadway version of “Legally Blonde” in the latter part of this year. She would also appear on yet another reality show, “Tia & Tamera Take 2″ with her twin sister Tamera Mowry very soon. However, as of now, Tia Mowry and her husband are set to welcome the new family member.

NEW YORK - For many, rats are not the first choice when it comes to keeping pets and they probab...

LONDON - A British man, who raped, tortured and slowly murdered his 12-year-old niece after he ...

AUCKLAND - The brother and a friend of the man who killed Indian-origin liquor store owner Navtej Si...
Copyright© 2011 The Gaea Times