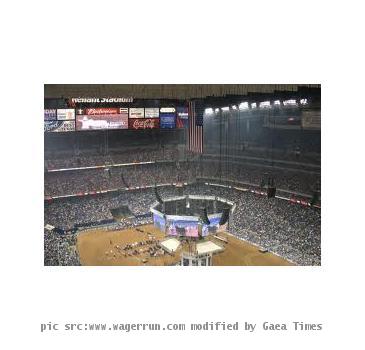 HOUSTON (GaeaTimes.com)-It seems Houston Livestock Show And Rodeo 2011 is already pumping up the Texas spirit even though the show is all set to kick start on March 1 and would continue till March 20. It is the biggest annual event of the state and is regarded as the “world’s richest regular-season rodeo”. The tickets for the show will be available from January 15 through Ticket Master’s website.

Houston Livestock Show And Rodeo 2011 is one of the most awaited musical event of the state. However, apart from the music, the event will also includes livestock shows and exhibition. Like every year, even this time more than 24,000 volunteers will be participating in making the event a huge success. It will also involve celebrating Armed Forces Appreciation Day, Black Heritage Day and Ladies Night Out. Trace Adkins, who would be performing for the Armed Forces Appreciation Day said that he always has a different degree of reverence for the armed forces. No matter where he goes, he always keeps in mind that it is because of them that the masses survive safely in the nation. Therefore, he is overwhelmed to perform for these heroes. Trace Adkins also added that he would be ready to perform for them at any given time of the year. A source, who lives outside the grand state of Texas said that she regrets missing the event, as Houston Livestock Show And Rodeo always “Does It Big”.

Apart from Trace Adkins, the other performers in Houston Livestock Show And Rodeo 2011 would be Janet Jackson, Selena Gomez, Tim McGraw, Alan Jackson, Brad Paisley, Billy Currington and many more. It would start with the performance of Clay Walker on the opening day and would conclude with the final performance of Jason Aldean on March 20. Tickets will be available at $10 and $5.

WASHINGTON - A new research has indicated that what your mother ate when she was pregnant may make y...

WASHINGTON - Scientists are using complex computer simulations to shed light on the workings of a ...

WASHINGTON - Want to stay fit and look good? Well, then change your focus from dieting to living he...

India is becoming the world attention grabber with its innovative technological products specifi...

HOUSTON - A woman in Katy, Texas, has been jailed after investigators found she was targeting her...

KATY, (GaeaTimes.com)- Lori Darling David, a 37 year mother of a teenager has been arrested ...

NEW YORK - The secret cult Opus Dei in Dan Brown's epic novel "The Da Vinci Code" was invoked by an ...

WASHINGTON - A new research has suggested that maternal smoking during pregnancy is a major risk fac...
Copyright© 2011 The Gaea Times