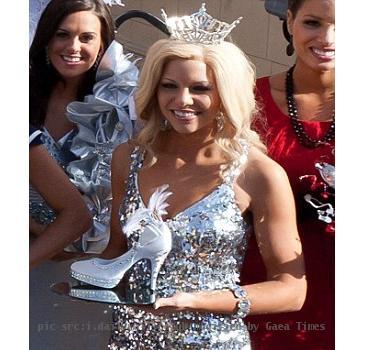 LAS VEGAS (GaeaTimes.com)- Miss Delaware Kayla Martell was one of the contestants who gained maximum attention prior and during the Miss America Pageant 2011. The 22-year-old bald beauty even won “America’s Choice” round as her fans voted for her through social networking sites, text messages and other mediums. However, Kayla Martell failed to make it to the final 5 contestants in the grand evening at Planet Hollywood in Las Vegas. Last night, the world witnessed 17-year-old Miss Nebraska Teresa Scanlan winning the crown and the scholarship of $50,000 as her prize money.

22-year-old Kayla Martell looked elegant and beautiful when she walked the ramp with elan. It seems that though she won the hearts of millions of her fans, she failed to win the heart of the judges. Kayla Martell is the second contestant from Delaware, who has made it to top 15 in the first cut itself. Though the organizers of Miss America Pageant 2011 told her that if she wants she can keep her natural bald look and she would not have to don a wig yet she insisted because she wanted to appear more approachable to the fans and the judges.

Kayla Martell suffers from alopecia areata and hence she suffers from hair loss. Prior to the Miss America Pageant 2011, she told a reputed media outlet that she wants to educate people about the disease through the contest. The contestant seemed excited and geared up for the grand event when she said that just being on the stage and competing with 52 other contestants is itself a dream come true for her. About her baldness, she said that a woman should never be defined by her hair.