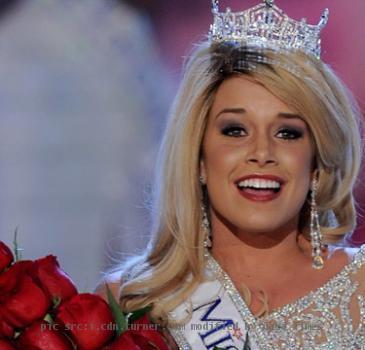 LAS VEGAS (GaeaTimes.com)- After months of speculations and suspense, finally Miss American Pageant 2011 winner was announced last night at a gala event in Las Vegas. 53 participants from all over the country scorched the stage with their beauty, smile and their talent as they fought for the much coveted and prestigious title. However, at the end, 17-year-old contestant from Nebraska, Teresa Scanlan took away the title and won Miss America crown on its 90th anniversary. The whole event was aired live on ABC.

Thousands of crowds gathered at the venue to witness Miss America Pageant 2011 and surely, none of them were disappointed as the show was full of entertainment. The gorgeous contestants left no stones unturned to win the title of Miss America but finally Miss Nebraska Teresa Scanlan took away the cake. Miss America’s official website has also stated that Teresa Scanlan has been honored the title with a whooping amount of $50,000 scholarship as the prize money. During the competition, the 17-year-old beauty marvelously played the piano and won the heart of the judges. In the preliminary competition, she even won the Talent Round.

Though 53 women were vying for the coveted crown to become the winner of Miss America Pageant 2011, finally Miss Nebraska’s dream came true. Teresa Scanlan is a student of Scottsbluff High School and Miss America 2011 website reads that the youngest contestant of the pageant fought with her eating disorders in her childhood days. Miss Virginia Caressa Cameron was the winner of the crown in 2010. This year, Miss America pageant was held at the Theater for the Performing Arts at Planet Hollywood. Chris Harrison of “The Bachelor” and gorgeous “Dancing With the Stars” host Brooke Burke hosted the gala event.

Smoke from fireworks is hazardous to health

LONDON - A woman television presenter has sued BBC claiming that the firm fired her for being too ol...

LONDON - The bombs smuggled in the cargo plane terror plot at East Midlands Airport and in Dubai rep...

LONDON - It seems that women would rather follow in the footsteps of Margaret Thatcher than Angelina...

NEW DELHI - It was a trip down memory lane for car lovers as timeless classics like Chevrolet Impala...