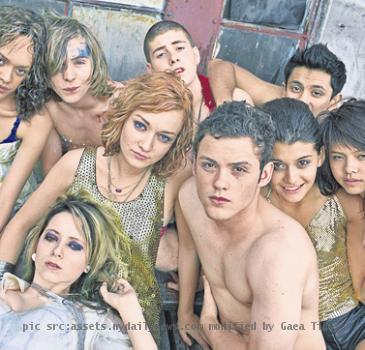 LOS ANGELES (GaeaTimes.com)- “Skins” aired its pilot episode on MTV yesterday. It is inspired from the British television series of the same name, that was premiered in 2007 on E4. MTV did not deviate much from the format of its British counterpart, and kept its pilot episode very similar to that of its original run.

It introduced all the main characters of the series, namely, Tony, played by James Newman; his friend Stanley, played by Daniel Flaherty; Tony’s hot girlfriend Michelle, by Rachel Thevenard. The pilot episode showcased the emotions of these characters, especially that of Stanley’s, who has a secret crush on Michelle. The other characters in “Skins” are Abbud (Ron Mustafaa) a non devoted Muslim; Cadie (Britne Oldford), a total drug addict; Chris (Jesse Carere), the party lover; Eura (Eleanor Zichy) Tony’s sister and Daisy (Camille Cresencia-Mills) the most responsible member of the gang. Almost each and every member of the cast are new, and most of them look good. The premiere episode on MTV showed how Tony helped his friend Stanley to lose his “V card”.

Tony the lead character in the British “Skins”, is a smart, confident and overt person. However, MTV projected him as a bit vulnerable. Sources say that in the original run, the chemistry between the caste members were so good, that the audiences could connect to them better. However, it seems to be lacking in the Americanized version. To put it together, “Skins” is all about rebellious, overtly sexual, wild, and disobedient teenagers. Although these problems are common amongst many young people, the way MTV projected it, was rather irresponsible. Sources say that instead of addressing these problems, they glamorized it.