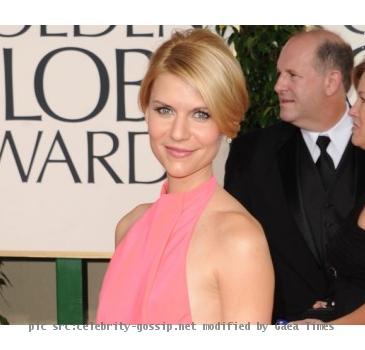 BEVERLY HILLS (GaeaTimes.com)- Claire Catherine Danes, the American actress of stage, film and television and film, received Golden Globe Award for the category of Best Actress in a Miniseries/Film for “Temple Grandin”. This was Claire Danes’ second Golden Globe Award as she previously won the award for “My So Called Life” for her extraordinary performance in the series. “Temple Grandin” is one of the popular films of HBO where Claire Danes plays the role of the protagonist. The biopic was nominated for about fifteen Emmy Awards and it bagged seven of them. Claire Danes also received award for Outstanding Lead Actress in a Miniseries or a Movie previously for her commendable performance in the miniseries.

After Claire Danes‘ name was announced, the actress seemed joyous as she kissed her husband Hugh Dancy and then went on stage. The actress seemed overwhelmed with emotions when she hold the trophy on her hand and said that was an honor for her to win the celebrated award for “Temple Grandin”. She thanked Hollywood Foreign Press for acknowledging her work and giving her relentless effort a recognition. She said that her character in “Temple Grandin” is filled with “incredible zeal” and she is thrilled to win the coveted award.

The gorgeous actress defeated Hayley Atwell, Jennifer Love Hewitt, Judi Dench and Romola Garai on the category of Best performance in a mini-series or TV film. Claire Danes also said that she first won a Golden Globe award, when she was only 15 year old and she was naive at that time. She said that her role in “Temple Grandin” was incredible and it would be difficult for her to play the role of a “flat girlfriend”, after playing such a power packed role in her previous biopic.

MELBOURNE - A security-check at Detroit Metropolitan Airport left a traveller covered in his own uri...

LONDON - A man playing video games was so enraged by the crying of a 15-month-old girl who was seeki...

Brit teacher to marry pupil he met when she was 16

LONDON - A 47-year-old UK teacher, who made headlines for having an affair with his teenage pupil, i...

What prevents zebrafish from biting off more than it can chew?

WASHINGTON - A research has given an insight into how a specific circuit of nerve cells functions i...

How laughter can make some snooze 100 times a day!

LONDON - Laughter may be the best medicine, but for some, it's nothing less than a disorder - a slee...

Geneva, Nov 6 (IANS/EFE) More than 2,000 people were evacuated from a Haitian refugee camp in Corail...

Emma Watson thinks she had 'too much freedom' growing up

SYDNEY - Emma Watson has confessed that she found her fame 'scary' at times because there were so fe...

Lee-Ann paces herself for Indian Open golf with Suzhou title

GURGAON - South Africa's Lee-Anne Pace grabbed her second straight title in as many weeks at the Suz...

LONDON - In her most candid interview till date, Rihanna has for the first time opened up about her ...

NEW YORK - Readers of magazine Marie Claire, who were angered by a blog maligning overweigh...
Copyright© 2011 The Gaea Times