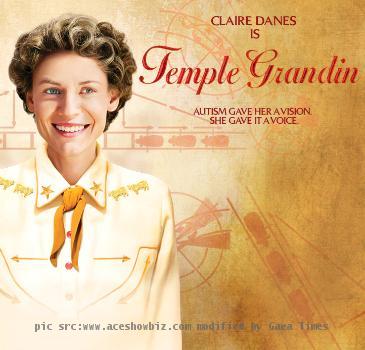 “Temple Grandin” was awarded with none less than 7 Primetime Emmy Awards. A grand total of 15 nominations were bagged by the telefilm.

What Claire Danes had to say to the media after receiving the Emmy was that,

“We worked very hard to tell a coherent, cogent story that charted Temple’s trajectory and growth…It was so special that her mother and she were here tonight.”

The notable achievements were:

“Temple Grandin” was also favored with the Best Made TV Movie Award. The movie set out with the tagline “What made her different made her exceptional” and indeed is a true work of excellence. Based in and around the life of an autistic woman Temple Grandin, the movie has lots to offer to the society. Temple Grandin overlooked her miseries to devote herself to the developments in animal husbandry. Through her journey she was awarded by PETA. She ended up being a professor at Colorado State University setting trends for all those who followed her trails.

Isn’t Temple Grandin’s journey inspiring ? — it sure is an experience of a life-time.

MELBOURNE - A Gold Coast farm has claimed that it is the only one in the whole of Australia to produ...

Chronology of world's worst stampedes in 2010

BEIJING - The following is a chronology of the world's worst stampedes in 2010, reports Xinhua Tuesd...

BHOPAL - The Anagarika Dharmapala Museum of the Maha Bodhi Society of India has been gifted original...

Yeddyurappa in Delhi for talks on his future