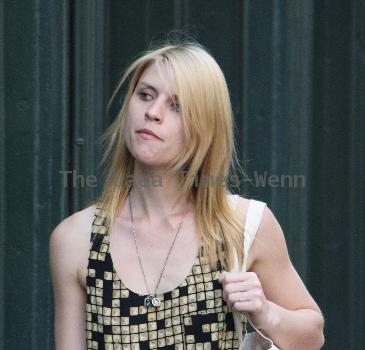 LOS ANGELES (GaeaTimes.com)-Claire Danes, on Sunday walked proudly on the Nokia Theater stage to receive the Emmy Award under the category of Best Lead Actress in a Miniseries. The actress received the award for her performance in the lead role of Temple Grandin that was aired on HBO. The strong and beautiful portrayal of a woman with autism, who revolutionizes the way livestock are handled at slaughterhouses and cattle ranches, has brought praises for the star much before the Emmy recognized the actress as the best in the category of Miniseries.

On Sunday, accompanied by her husband actor Hugh Dancy, Claire Danes seemed overjoyed with the announcement of the award. After giving a quick kiss to Hugh Dancy, the actress walked to the stage to accept the prestigious award. In her acceptance speech, Claire Danes thanked HBO first for “existing” and thanked the channel for helping in making television “so vital and electric”. Back stage Claire Danes said to media sources that she had taken the role of Temple Grandin very seriously and maintained that she had never worked harder for any other role in her life. The actress also mentioned that she had never ever been inspired by any other person in her life as she has been by Temple Grandin.

Temple Grandin was herself present during the award ceremony with her mother and voiced to media sources that she was herself inspired by the beautiful portrayal of the character on the reel by Claire Danes. However, winning an Emmy Award has increased the expectation of the fans of Claire Danes who now hope to see the actress come up with some more brilliant performances in the future.

MELBOURNE - A security-check at Detroit Metropolitan Airport left a traveller covered in his own uri...

LONDON - A man playing video games was so enraged by the crying of a 15-month-old girl who was seeki...

Brit teacher to marry pupil he met when she was 16

LONDON - A 47-year-old UK teacher, who made headlines for having an affair with his teenage pupil, i...

What prevents zebrafish from biting off more than it can chew?

WASHINGTON - A research has given an insight into how a specific circuit of nerve cells functions i...

How laughter can make some snooze 100 times a day!

LONDON - Laughter may be the best medicine, but for some, it's nothing less than a disorder - a slee...

Geneva, Nov 6 (IANS/EFE) More than 2,000 people were evacuated from a Haitian refugee camp in Corail...

Emma Watson thinks she had 'too much freedom' growing up

SYDNEY - Emma Watson has confessed that she found her fame 'scary' at times because there were so fe...

Lee-Ann paces herself for Indian Open golf with Suzhou title

GURGAON - South Africa's Lee-Anne Pace grabbed her second straight title in as many weeks at the Suz...

LONDON - In her most candid interview till date, Rihanna has for the first time opened up about her ...

NEW YORK - Readers of magazine Marie Claire, who were angered by a blog maligning overweigh...
Copyright© 2010 The Gaea Times