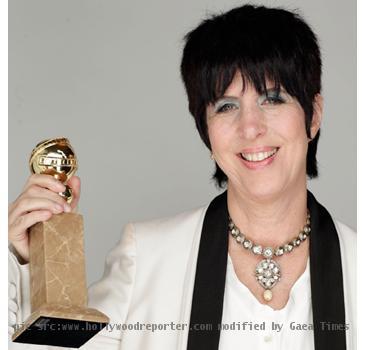 BEVERLY HILLS (GaeaTimes.com)- It was an all emotional night for Diane Warren who bagged the best original song award at the 68th Golden Globe awards. The lyricist went on to say that she has dedicated the award to deceased publicist, Ronni Chasen. She said that she has been nominated five times and this time lady luck favored her.

Daine Warren mentioned that she dedicated the award to her friend, Ronni Chasen. The unfortunate death of Ronni Chasen came as a massive blow to the entertainment industry. Police believe that the publicist was killed as a part of a bungled robbery attempt at Beverly Hills. Daine Warren in her acceptance speech said that she is dedicating the award to someone who was loved by all, Ronni Chasen. Backstage, she said that she loved the late publicist. She also said that the saddest part about the award ceremony was that Ronni Chasen was not present there to celebrate the joy with her. She said that whatever she gets, she would dedicate it to her friend. Ronnie Chasen was murdered in November on her way back from attending the Burlesque premiere.

In the same speech Daine Warren gave on stage, she said that she was very lucky to win the prize this time after being nominated for five times. She also said that her father wrote her acceptance speech which she had lost. She won the award for the Best Original Song “You Haven’t Seen the Last of Me” from the movie “Burlesque”. She was overjoyed to receive the award which was evident from the excitement with which she gave her acceptance speech.

NEVADA - In a remarkable interfaith gesture, clergy belonging to various religions and denomination...

Diane Keaton on her decision not to marry

WASHINGTON - Actress Diane Keaton has spoken out about her decision not to marry and how in some ...

Diane Keaton speaks about her insecurities despite success

WASHINGTON - Actress Diane Keaton has spoken out about her insecurities and how despite her succe...

LONDON - Diane Keaton suffered a dizzying bout of vertigo last year, before she was injured in a wr...

NEW YORK - 'Megamind' has topped this weekend's box office, leading the way with an estimated 30.1 m...

Ford was 'starstruck' when he met Keaton

LONDON - Harrison Ford has revealed that he was starstruck when he met Diane Keaton. Ford was le...

Woman in UK finds out about bigamist husband through Internet

LONDON - A woman in Britain has revealed how she found out through the Internet that her husband, wh...

Breastfeeding can benefit even the sickest babies

WASHINGTON - It looks like even the sickest babies can benefit from breast-feeding. Pediatric rese...