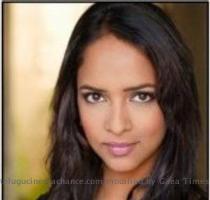 MUMBAI, (GaeaTimes.com)- Telegu actress Lakshmi Manchu is all set to tread in Bollywood. The south-Indian beauty who is the daughter of Telegu superstar Mohan Babu in all chances will be seen opposite Hrithik Roshan in “Krrish 3″. The buzz has it that director Rakesh Roshan has planned to launch the Telegu actress in the B-town with his sci-fi flick.

Although the news is yet to be confirmed but rumors are already abuzz that Lakshmi Manchu will be seen in the super- hero action movie. A little birdie close to the Roshan camp revealed that earlier, the movie makers had chosen to offer the role to Bollywood glam-doll Kangana Ranaut which somehow failed to assume the final shape. The movie offer was then passed onto Lakshmi Manchu. However, the role is still not clear, with a number of speculations flooding the tinsel town. While some say that the daughter of the Telegu superstar hero has not been given a the role to play the female lead in the movie, others are saying that the director has promised the actress that she would get to play a lengthy role which is crucial for the story line.

According to sources, official confirmations are pending as Lakshmi Manchu is yet to sign the movie contract. The actress who is already a big name in the Telegu film industry is all excited about her new role. Indeed any body would be for bagging a chance to act in a movie with Bollywood hunk Hrithik Roshan, that too for the first time is a big achievement in itself. Lets see if Rakesh Roshan’s idea to go for a new face for his next movie succeeds with the audience or not.

NEW DELHI - The Prime Minister, Dr Manmohan Singh, has condoled the passing away of noted Gandhian ...

I had to put Nehru in right perspective: Author-niece

NEW DELHI - Jawaharlal Nehru has of late been "misinterpreted" and so it was important to put India'...

MUMBAI - A benchmark index for Indian equities gained nearly five percent this week to hit a new all...
Copyright© 2011 The Gaea Times