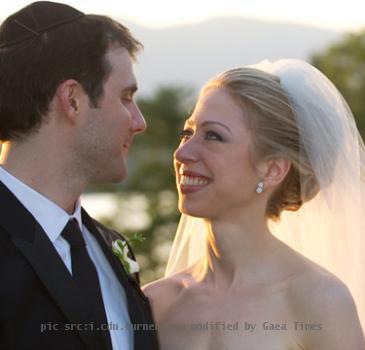 NEW YORK (GaeaTimes.com)- All is well between Chelsea Clinton and her investment banker husband Marc Mezvinsky, sources close to the couple have divulged to the media. Close friends of the pair have insisted that the marriage between former U.S. President Bill Clinton and current Secretary of State of Hillary Clinton’s daughter and her longtime beau is still going strong, despite multiple reports of their relationship being on the rocks. Although Chelsea Clinton’s representative has denied to make any official comments regarding the reports of their troubled marriage, a close friend of the couple has brushed away the rumors claiming that the pair are considering parting ways over differences regarding starting a family.

The rumors claiming that Chelsea Clinton’s marriage is on the rocks hogged the limelight for the first time when it was reported that Marc Mezvinsky has left his job at the New York based financial firm G3 Capital and was considering taking a snowboarding trip at the Jackson Hole ski resort sans his wife. While the investment banker would be enjoying his free time in the Wyoming based resort for three months, his wife would be staying in New York where she is pursuing a PhD at New York University’s Wagner School of Public Service.

Despite staying away from each other for few months, a close friend of Chelsea Clinton has divulged that the former U.S. first daughter would be visiting her husband frequently in every few weeks. The gala marriage ceremony of Bill Clinton’s daughter and the 33-year-old investment banker took place on July 31, last year and it was pitched as American’s ‘royal wedding.’

LONDON - Chelsea skipper John Terry could be back in action in just a few days after fears were ex...

LONDON (GaeaTimes.com)- It takes a lot of luck to be connected with the British Royal family. ...

LONDON - Chelsea's ace striker Didier Drogba is not like any other footballer indulging in extravaga...

Terry says not bitter or angry about losing England captaincy

LONDON - Chelsea skipper John Terry has said that he is not bitter or angry about losing the Englan...

LONDON - Jack Wilshere, the 18-year-old England footballer, went behind his girlfriend's back for se...
Copyright© 2011 The Gaea Times