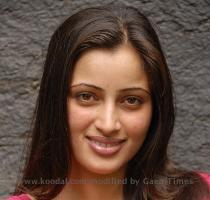 AMRAVATI, INDIA (GaeaTimes.com)- Tollywood actress Navneet Kaur has finally tied the knot with MLA Ravi Rana amidst several others in a mass marriage ceremony in Amravati , Maharashtra. The wedding drew the attention of the media not only for the star status but because of the fact that the popular South Indian actress was tying the knot with her boyfriend in the middle of a mass marriage where 3,611 other couples also got hitched.

The mass wedding saw the presence of eminent personalities which included political figures Maharashtra Chief Ministers Ashok Chavan, Industries Minister Narayan Rane, Amravati guardian minister Ramkrishna Vikhe Patil. Yoga guru baba Ramdev was also present to bless the newly-wed couples. Sahara India Pariwar veteran Subrata Roy who is already known for his open acknowledgment towards these kind of social acts also made an appearance. A dash of the tinsel town could be seen for actors Vivek Oberoi, Suresh Oberoi, Aditya Pancholi and Kunika were also among the list of celebrities present at the event. The mass wedding where Navneet Kaur took the wedding vows with her beau was held inside a giant pandal that was set up by Baba Ramdev’s organization. Actor Vivek Oberoi is said to made utensil donations to 1100 couples.

New bride Navneet Kaur looked immensely beautiful decked in a maroon ghagra choli teamed with dazzling gold and diamond jewelery. The mass wedding was conducted at the Science Core ground with 2443 Hindus, 739 Buddhists, 150 Muslims, 15 Christians, 13 visually impaired including pardhis and tribals tying the knot. Maharashtra Chief Minister Ashok Chavan encouraged the step boasting that social acts like these should come up more instead of indulging in unnecessary extravaganzas.

LUCKNOW - Three drug peddlers, who operated in several states of the country, were arrested in Barab...

Frankfurt Book Fair will never be the same again. This is no doomsday call. Well, almost not, but an...

BARABANKI - Seven drug peddlers, who operated in various states, were arrested with morphine and opi...

HYDERABAD - Hundreds of enthusiasts of automobiles made their presence here to get a sneak peek at s...

MOHALI - Three teenagers were washed away by strong currents at Mullanpur village in this district T...

Uttar Pradesh could save 1,080 MW with CFLs: Official

LUCKNOW - A 12-year-old boy in Uttar Pradesh killed his 10-year-old brother in a fit of rage and dum...
Copyright© 2011 The Gaea Times