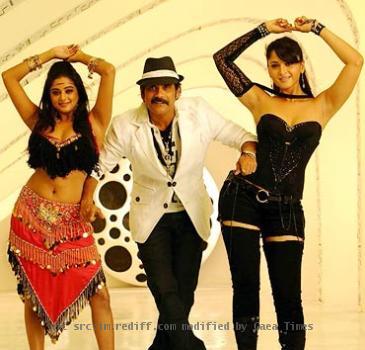 HYDERABAD, INDIA (GaeaTimes.com)- All the ardent fans of Telugu movie superstar Nagarjuna have something to look forward this weekend as his latest presentation ‘Ragada‘ has finally released in theaters. The movie which has been directed by renowned director Veeru Potla, is one of the biggest releases of the year and has been eagerly awaited by the die-hard Nagarjuna fans. The flick which belongs to the action genre, has been produced by D. Sivaprasad Reddy and the music of the film has already become quite popular among the masses.

‘Ragada‘ would witness the Telugu superstar romancing two leading ladies Anushka Shetty and Priyamani, who are edging the other pivotal characters in the movie. The buzz surrounding the flick is all the more high as it promises to include the necessary doses of entertainment with action packed drama that is sure to keep the viewers asking for more. At the same time, the love triangle between the three lead characters is another factor that has heightened the anticipation regarding the movie among the movie-goers. Meanwhile, the action flick would be released under the A-certificate as it has been passed by the Censor Board without any deleting any sections.

In an interview to a reputed news source recently, Nagarjuna said that although the script of ‘Ragada’ does not have anything new, the presentation and treatment of the subject is absolutely different that is sure to add a fresh feel to the movie. The much-acclaimed actor further went on to say that ‘Ragada’ is not a hard-core action movie but an entertaining one with comedy and songs.