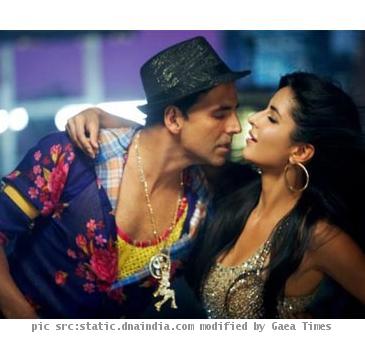 MUMBAI, INDIA (GaeaTimes.com)- One of the most hyped and much awaited flicks of the year, ‘Tees Maar Khan‘ has released in theaters all over the nation today. The anticipation involving the movie was all the more high as it has been directed by none other than Farah Khan who is best known for her tongue-in-the-cheek and almost absurd style of humor showcased in her earlier flicks that despite all its irrelevance, somehow or the other always manages to ensure that the audiences have a gala time. Despite the fact that in her latest venture, the audiences would dearly miss the presence of Farah Khan’s former best buddy ‘Bollywood Badshah’ Shahrukh Khan, ‘Tees Maar Khan’ promises to provide the movie-goers with the best offering this festive season.

The much anticipated flick basically tracks the story of an internationally wanted conman Tabrez Mirza Khan aka Tees Maar Khan played by Akshay Kumar who is set to thrill the audiences with his outrageous acts accompanied with the humorous elements that one normally associates with a typical Farah Khan movie. The music of the flick has already struck a chord with the audiences especially the item song ‘Sheila Ki Jawani.’ With Katrina Kaif providing the oomph factor to the movie with her sizzling item number ‘Sheila Ki Jawani’ that has left many hearts racing, it seems that ‘Tees Maar Khan’ has all the necessary elements to ensure that it turns into a runaway hit.

However, whether ‘Tees Maar Khan‘ is able to retain the hype associated and actually manages to entertain the audiences to the fullest is something that would be clear in the upcoming days.