Imtiaz Ali On ‘Koffee With Karan’ 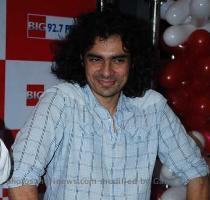 MUMBAI, INDIA (GaeaTimes.com)- When four ace directors of Bollywood came together to share a cup of hot coffee then there are no prizes for guessing that the obvious topic of discussion is going to be movies. However, if its Karan Johar’s chat show then the least that can be expected is hard kept secrets spilling out of the closet with the candid conversation and the scary yet entertaining rapid fire round. The scenario was not different when some of the highly-acclaimed directors of B-town namely Rajkumar Hirani, Farah Khan and Imtiaz Ali graced the couch on “Koffee With Karan” season 4 in an episode that was aired last night on Star World.

As viewers might have presumed, the latest episode of ‘Koffee With Karan’ featuring the ace Bollywood directors turned out to be a highly entertaining one with all the celebrity guests facing a volley of questions from host which included few tricky tropics as well. With Farah Khan stealing much of the show with her incredible one-liners, the other two guests Imtiaz Ali and Rajkumar Hirani were also not far behind. Despite the fact that the “Jab We Met” director is known to be a man of few words, this surely was not a factor that could deter Karan Johar from asking the director some real tricky questions. However, Imtiaz Al replied to all the questions with quite a candid manner, in turn ensuring that the viewers who had tuned into watch the episode have a gala time.

Apart from Imtiaz Ali, the other two guests Farah Khan and Rajkumar Hirani were also not spared by Karan Johar who could not resist asking them about some much talked about issues associated with them.

ISLAMABAD - US President Barack Obama's comments about backing India for a permanent seat on the Uni...

ISLAMABAD - Increasing tension between the Pakistan Interior Minister Rehman Malik and Islamabad In...

A Briton who spreads knowledge in Pakistan

ISLAMABAD - From the plains of Punjab province to the rugged mountains in Waziristan, a former Briti...

NEW DELHI - Imran Khan and Deepika Padukone will once again be seen together in Homi Adajania's yet ...

ISLAMABAD - The Pakistan government has decided to preserve the archeological beauty of the city by ...

MUMBAI - Eros International Media has inked a Rs.64 crore deal for exclusively broadcasting some of ...

MUMBAI - When actress Aishwarya Rai walked the ramp after many years as the showstopper for designer...