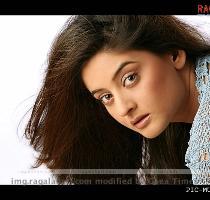 MUMBAI, INDIA (GaeaTimes.com)- “Jhalak Dikhla Jaa” Season 4, had the second round of performance yesterday. However, one cannot deny that the performers of the first day were way better than that of yesterday. All those who performed yesterday were, Krushna Abhishek, Mahi Vij, Meiyang Chang, Ankita Lokhande and Akhil Kumar. However, the twelfth contestant, whose name was not revealed in the first episode, turned out to be none other than the television favorite “Darwaza Tod Do” cop, Daya of Sony’s CID.

One of the most power packed performers of yesterday’s episode was Mahi Vij, who is better identified as “Nakku” in the Indian small screen. The tiny and petite girl from Delhi, is not a trained dancer. In fact, she confessed that her dancing skills are limited to Bhangra, and tapping the foot at local Punjabi weddings. However, all those who witnessed it, could not believe her, as the performance she delivered was a complete blast. Her choreographer said that energy is inherent in all Punjabis, and therefore, Mahi Vij is no exception to that. She tapped her foot with the title track from the film “Dil Bole Hadippa”. Although the dance was meant to be a hip hop, it was carried out with the typical Bollywood masala style with a dominant influence of Bhangra. She got extremely good reviews from the judges. Madhuri Dixit said that good things come in small packages and Mahi Vij has proved that. Everyone appreciated her flexibility and clean foot movement.

Even the three guest judges, Akshay Kumar, Katrina Kaif and Farah Khan, loved her performance. Mahi Vij confessed a secret. She always wanted a husband, who looks like Akshay Kumar, and when she first met her fianc, she was taken over by him, as his smile resembled with that of her most admired star.

ABU DHABI - When he ran on the tracks, he won medals; when he ran in the ravines of Chambal as a reb...

MUMBAI - The much talked-about item song in Mani Shankar's "Knock Out" has been knocked out of the f...

September 14, 2010 (Sampurn Wire): Bollywood star Salman khan is known to be a man of golden heart...

At a glance: What's on the list for Whole Foods' new seafood guidelines

Shweta Tiwari to shake a leg on 'Sangini' (TV snippets)