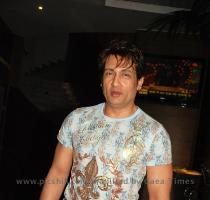 MUMBAI, INDIA (GaeaTimes.com)- Guess who is still strong and fit enough to be a part of a dance reality show at the age of 50? It is none other than Shekhar Suman. The poor hero tried his level best to try his luck in acting several decades ago, but failed miserably. However, he did not give up at all. He though if not acting then he should be good at something atleast? Well why not singing then? Soon he released his first musical album! Does anyone know about it?

The 50-year-old was badly criticized for having the audacity for even dreaming about giving competition to Shahrukh Khan and Aamir Khan, when he decided to make a terrible six packs and bronzed them on his cleavage and punky dressing style, to hit a “hot” photo shoot which did not put anyone in awe but invited a lot of controversies last year. He was so frustrated with his meager amount of success that he even tried to find the reason behind it, by relating it to his ‘karm’ of his last birth in “Raaz Pichhle Janam Ka” and made a complete fool of himself. Nevertheless, probably he still could not conclude what he is actually good at and therefore tried his luck in dancing. Here comes Shekhar Suman in “Jhalak Dikhla Jaa 4″. Let us all find out whether he is good at dancing atleast?

Shekhar Suman said that he accepted the offer from the show because it would give him an opportunity to learn various dance genres like Salsa, Zumba, Samba, rumba without pinching his pocket! Poor man we all understand what it feels when you are out of job and media glare and therefore cannot even afford to take dancing lessons.

NEW DELHI - The Indian sailing team, which won a silver medal in the match racing event at the ong...

RAIPUR - The number of patients suffering from sickle cell anaemia - a form of blood disorder - are ...

GUANGZHOU - India won a surprising silver in the men's open match racing event at the Asian Games he...

RAIPUR - Over 200 experts from across the world will meet here to discuss rising cases of "sickle-ce...

KOLKATA - Management schools in India should improvise their syllabi to respond to the managerial ch...
Copyright© 2010 The Gaea Times