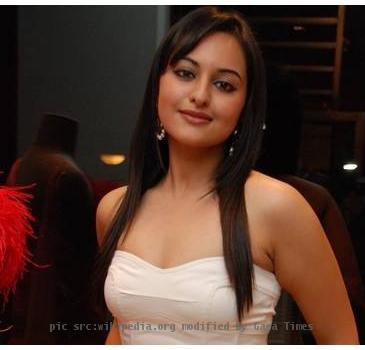 MUMBAI, INDIA (GaeaTimes.com)- The rise of Sonakshi Sinha to stardom has been amazing, considering she is just one film old in Bollywood and yet she has bagged the plum roles from all the big production houses. After the massive success of her debut film ‘Dabangg’ the young actress is hogging the limelights for various reasons. She has been signed by film maker Farah Khan for her upcoming movie Joker. However, The actress will have to work hard for this role. The director is very particular about the actresses in her film maintaining a svelte figure. She made actress Katrina Kaif do rigorous exercise and adhere to a special diet for her raunchy item number in ‘Tees Maar Khan’. Now Sonakshi Sinha has also been asked by the director to shed the excess flab from her figure.

Sonakshi Sinha is reportedly going to turn slimmer for her role in Joker. The trainer of actress Katrina Kaif, Yasmin Karachiwala has been roped in to help Sonakshi Sinha shed the flab fast. The actress also confirmed the news and said that she thinks the new regimen would do wonder for her figure. Sonakshi Sinha was rather plump before her Bollywood debut and Salman Khan who worked as her mentor also helped her lose weight.

‘Joker’ will be directed by Farah Khans spouse Shirish Kunder. Sonakshi Sinha will be sharing screen space with actor Akshay Kumar in this film. The actress impressed the viewers and critics alike with her acting skills in Dabangg where she played a village belle. However, in the new film she will be seen in a new avatar a role that requires her to be fit and thin.