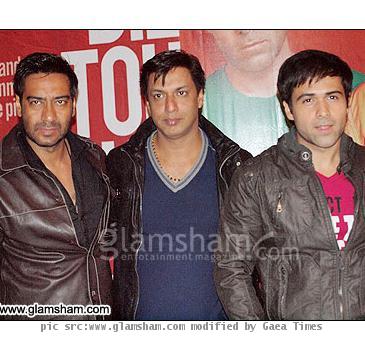 MUMBAI, INDIA (GaeaTimes.com)- The Republic Day is just two days ahead and the movie that will hit the theatres this week is the comedy ‘Dil To Bachcha Hai Ji’. The movie directed by ace director Madhur Bhandarkar has actors Ajay Devgan and Emraan Hashmi in key roles. The actors fresh from the stupendous success of their earlier movie ‘Once Upon A Time In Mumbai’ want this one to be a hit too. The director who is known for making realistic hard hitting films is stepping into the genre of romantic comedy. The actors have embraced unique ways to impress the young movie viewers with their messages.

Republic Day is approaching and Actor Ajay Devgan has said in his message that it is high time the young population of the nation join politics and help the country in making progress. The actor thinks that there is no sue putting up with a corrupt system and blaming it all the while. Instead of that the youth should join politics and weed out the roots of corruptions from the system. The actor tried to convey the same message to the viewers in the Mani Ratnam film Yuva which was released a few years back.

The so called serial kisser of Bollywood Emraan Hashmi also thinks that the young lot need to speak up against corruption and injustice. However, the skeptics may argue such messages conveyed just ahead of January 26th aka Republic Day is a device the stars have resorted to is meant for impressing the viewers and tapping their patriotic sentiments. This could be an indirect way of promoting their movie.

LISBON - US President Barack Obama has said that NATO leaders have approved plans to expand a ...

NEW DELHI - To further boost India's economic ties with the Gulf region and to promote trad...

WASHINGTON - A new research has found that the Limon and Pedro Miguel faults in Central Panama have ...
Copyright© 2011 The Gaea Times