Sussanne Roshan On ‘Koffee With Karan’ 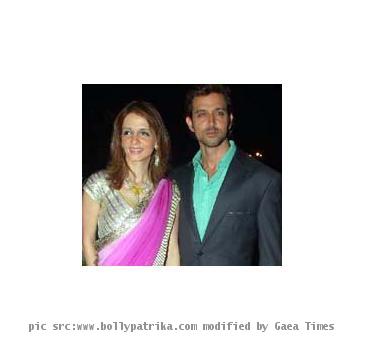 MUMBAI, INDIA (GaeaTimes.com)- Ace director Karan Johar’s celebrity chat show “Koffee With Karan” is known to give revealing insights to the fans about the personal life of their favorite Bollywood stars. Things were no different on the show last night when superstar Hrithik Roshan graced the couch along with his beautiful wife, Sussanne Roshan. The couple who are otherwise known to be quite media shy, surprised the host as well as the viewers alike as they were in their candid best, divulging intrinsic details about the much-talked about relationship. However, the surprise package of last night’s show was surely the ace actor’s pretty wife Sussanne Roshan who completely rocked the show and spoke uninhibitedly not only about her superstar husband but also about his alleged link-ups with many Bollywood leading ladies.

While introducing Hrithik Roshan on the episode that aired last night, Karan Johar said that over the years, he has seen the 37-year-old star transform from a ’shy, scrawny, introverted kid’ to a Bollywood superstar as well as a respected actor. At the same time, Karan Johar was equally welcoming while talking about the actor’s better-half Sussanne Roshan and described her as a ‘lovely and friendly girl’ who with time has evolved into a successful career woman.

Although the huge fan following of Hrithik Roshan surely ensured that last night’s episode of “Koffee With Karan” receives high viewership, it was his wife Sussanne Roshan who completely stole the show. The megastar’s wife who is otherwise known to be shy and reticent, talked at lengths about her husband’s alleged link-up with actresses Kareena Kapoor and Barbara Mori.

September 23, 2010 (Sampurn Wire): Superstar Hrithik Roshan is the latest entry from Bollywood to ...

Sussanne Roshan Furious With The Press

June 2, 2010 (Sampurn Wire): Sussanne Roshan is furious with the press for coming up with stories...

NEW DELHI - Bollywood celebrities went all out Saturday to pay homage to the victims of the Mangalor...
Copyright© 2011 The Gaea Times