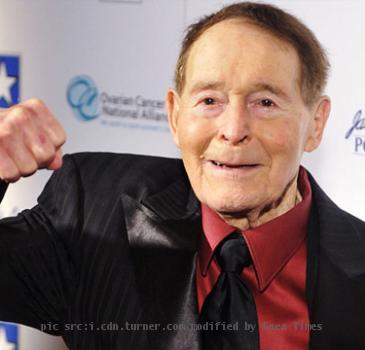 MORRO BAY (GaeaTimes.com)- The fitness guru of America and the “Father of modern fitness movement”, Jack LaLanne left for the heavenly abode on Sunday, at the age of 96. Sources say that the main reason behind his death was a pneumonia, that further led to respiratory failure.

The modern fitness guru, Jack LaLanne used to tell her family members and friends that he cannot die as that it would ruin his image. However, age made him succumb to his poor health on Sunday. However, his daughter, Yvonne LaLanne, 66 said that her father was absolutely fit until a month ago. Even at the age of 96, he taped for a public television special. She also added that everything seemed normal and no one could predict what was in store for him on Sunday. He was surrounded by his family and friends, when he passed away quite peacefully, with no pain and distress. According to the sources even in his 90s, Jack Lalanne used to do everything possible to keep himself fit and fine. He used to exercise for two hours, which included 30 minutes of swimming and 90 minutes of weightlifting.

Wife Elaine Lalanne, whom Jack LaLanne had been married for the last 51 years, said in a statement that she has not only lost her husband, but also a very loving partner and her best friend, who has also been adored by several other Americans over the years. CNN’s talk show host, Larry King said on Sunday night that there would not be another Jack LaLanne, as he has been a true guru. According to the host, it would be Charles Atlas from the old comic book, who must have been his predecessor. Rick Hersh, Jack LaLanne’s agent said that no funeral has been planned so far.

Five Gadget Accessories that are Essential for Traveling

The big holiday season starts this week with Thanksgiving Day. Traveling is very hectic during this...

NEW YORK - A new study has revealed that Indians and Chinese managers are rated the best amongst the...

LONDON - Arsenal midfielder Jack Wilshere has received a police caution for common assault over a st...

LONDON - Leonardo DiCaprio is set to star in 'Legacy of Secrecy,' an adaptation of a book about the ...

LONDON - Hollywood actor Leonardo DiCaprio is teaming up with his father George to produce a new mov...

LOS ANGELES - Hollywood actor Leonardo DiCaprio is teaming up with his dad George to produce a film ...

Statement from the President on the Confirmation of Jacob L. Lew to be Director of the Office of Management and Budget