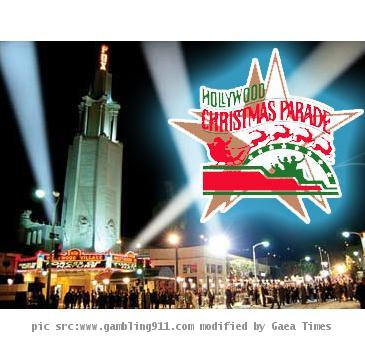 LOS ANGELES (GaeaTimes.com)- On Sunday night, Los Angeles was decked up with spectacular color and dazzling lights as it prepared itself for one of the highly anticipated events Hollywood Christmas Parade 2010. Emmy award-winning television host Larry King was the Grand Marshall for the event who inaugurated the program. The 3.5-mile route of the grand event follows Hollywood Boulevard and Sunset Boulevard and many celebrities graced the event who encouraged all other participants and also walked the streets as participants.

Hollywood Christmas Parade 2010 kicked off with felicity and fanfare on Sunday evening and the spectators watched the bandwagon of celebrities down on the street. “CHiPs” star Erik Estrada was the host of the event who entertained the audience to its fullest. Other stars include “Dancing with the Stars” participant Kyle Massey, Stefanie Powers and Dick Van Dyke. To attract young audience the organizers have invited the young actors of Disney Channel and Nickelodeon who were also present on the show. The parade also featured 70 celebrities and 14 VIP guests who graced the occasion.

The Hollywood Christmas Parade has gone through some rough phase recently where as in 2007 the event was nearly being cancelled owing to some problems. The downward popularity of the event in 2008 it received no television coverage. However, in 2010 it has been reported that though the parade will not have a live broadcast but it will be taped by Hallmark Channel. The channel officials reported a reputed media source that they will air Hollywood Christmas Parade 2010 on December 10. The local police maintained a tight security as the safety of the commoners was the priority of the police. Government granted special trains for the commoners to travel as well.

LONDON - Hollywood actor Leonardo DiCaprio was among passengers on a plane bound for Moscow that was...

LONDON - Simon Cowell's fiancee Mezhgan Hussainy has rubbished rumours that she and the media mogul ...
Copyright© 2010 The Gaea Times