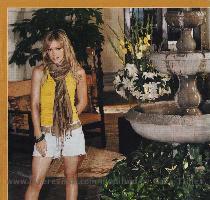 LOS ANGELES (GaeaTimes.com)- “The Real Housewives Of Beverly Hills”, is definitely one of those shows, where the star cast is highly paid for clashing with each other and getting famous. Recently, the featuring of the highly tempted “Playboy” playmate, Faye Resnick marked yet another verbal conflict amongst the ladies.

The fight took place between Camille Grammer against Faye Resnick and Kyle Richards. Faye Resnick appeared as a guest in the show after she was invited by Kyle Richards, who considers her to be a sister. However, things took a different turn when Camille Grammer arranged for a dinner party at her home, where she invited the other ladies of the show, including the voluptuous “Playboy” model. The calm disposition of all the stars came under turbulence, when all of a sudden, the guest started accusing Kyle Richards for insulting her in one of the episodes before. The latter completely denied the accusation and asked her to stop the discussion in order to retain the friendly spirit of the party. However, the next target of the host was ofcourse Faye Resnick. Camille Grammer said that she has used the sensitive situation of her friend’s murder to gain media footage and public attention. Her sole intention was to come out of the “Playboy” image in order to do more sensible work in the industry. Sources said that whatever she said made no sense because, even Camille Grammer had posed for “Playboy” 15 times, before getting famous.

Faye Resnick is best remembered for her involvement with the O.J. Simpson trial case, where her pal, Nicole Brown Simpson was murdered by O.J. She said that the criminal had told her about his plans, before he actually committed the crime. Later she wrote a few books on her experience.

Mums win hands-down when it comes to naming babies

LONDON - When it comes to giving babies their names, mothers win hands down, according to a surve...

Bob DuPuy quits as baseball's chief operating officer, was Selig's No 2 for 8½ years

Toddlers named Rose or Corey most likely to throw tantrums

LONDON - A survey has revealed that kids with names like Rose or Corey are the most likely to throw ...

LONDON - Tony Blair, the former British Prime Minister, has admitted that he was "worried for Pr...

Follow the adventures of Faye, Fidget, and their daughter Lyra from the beginning with this fantasti...

Blair 'i Told Princess Diana Of My Concerns'