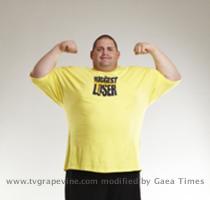 LOS ANGELES (GaeaTimes.com)- The biggest loser team has revealed the names of the contestants who would be confronting each other in the upcoming season of the show, entitled as “The Biggest Loser: Couples 4″. Along with that, they have revealed a few more surprises too. According to the sources, apart from the two existing trainers, namely Bob Harper and Jillian Michaels, two more would be introduced in the next season. The four trainers would be responsible for subjecting the contestants to rigorous training sessions and physical tasks. Another surprise that might disappoint many is that, the next season would conclude the contractual term of Jillian Michaels, who has starred in the show for the last few seasons. Rulon Gardner is reportedly one of the contestants of “The Biggest Loser: Couples 4″, which is set to kick from January 4, 2011 on NBC.

Rulon Gardner would be part of the Yellow Team along with his partner Justin Pope. The other contestants would be Ana Alvarado and Irene Alvarado from Orange Team; Olivia Ward and Hannah Curlee from the Purple Team; Larialmy Allen and Jaquin Allen from the Red Team; Ken Andrews and Justin Andrews from the Brown Team; Marci Crozier and Courtney Crozier from the Light Blue Team; Jay Jacobs and Jennifer Jacobs from Green Team; Denise “Deni” Hill and Sarah Nitta from the Pink Team; Jesse Wornum and Arthur Wornum from the Blue Team and finally Moses Kinikini and Kaylee Kinikini from the Grey Team. Rulon Gardner is expected to be a very tough contender, as he has the strongest background in sports amongst all the other contestants.

Rulon Gardner has been an Olympic athlete and even a gold winner in the event. He has also remained a footballer in several seasons. Although he is obese, he is physically quite competent and flexible, with a degree in physical education. He has every potential to bag the grand prize money of $250,000, if his partner proves to be equally competent.

US women beat China 12-9, advance to quarterfinals of water polo at world championships