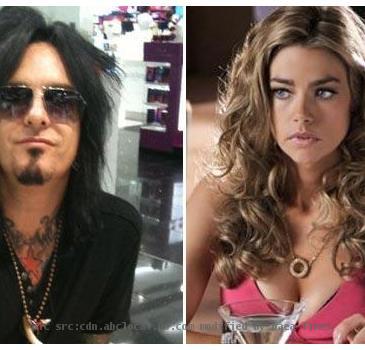 A reputed gossip site reported that Nikki Sixx took to the homepage of his social networking site to reveal that he has planned a “midnight rendezvous” with a beautiful woman. The media sources claim that the beautiful woman is Denise Richards as the pair was seen together at a reputed California restaurant next morning. The eyewitnesses reported that the pair seemed to have a good time with each other and also they were seen getting cozy at their breakfast table. An eyewitness reported that Nikki Sixx was telling some stories and Denise Richards was laughing and the pair looked quite comfortable with each other. However, neither Nikki Sixx nor Denise Richards were available for any comments about this issue.

A source, close to Nikki Sixx said that the couple has lot in common and they are presently taking things slowly. Denise Richards previously said that she finds it difficult to keep a balance between her children’s needs and at the same time, having a life of her own. The actress, reportedly, said that she finds dating is a challenging task. The ex-wife of Charlie Sheen said that she would not introduce someone to her kids unless she is serious about the person. Denise Richards also said that her daughters are her main priorities in life right now.

TORONTO - Ecstatic over the victory of Nikki Randhawa Haley as governor of South Carolina in the US ...

WASHINGTON - Nikki Haley, who created history by becoming the first woman to win the governor's race...

WASHINGTON - Days ahead of his visit to India, US President Barack Obama saw his Democratic party su...

South Carolina, the southern US state that Republican Nikki Haley, a daughter of Sikh immigrant par...