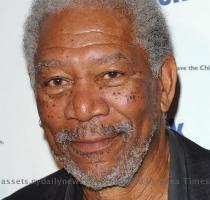 LOS ANGELES (GaeaTimes.com)- Celebrity death rumors have been one of the best baits of pranksters for the past couple of years. Thursday the world again saw one mischievous act through the giant social networking site of Twitter. This time it was a death hoax news of ace Hollywood actor Morgan Freeman. Many on seeing the news that the veteran actor was dead were shocked but later it was confirmed that it was simply a rumor. The 73 year old actor is very much alive and is doing absolutely fine. Hoaxes like these have become very common on various social networking sites. It is no doubt that people who are actually responsible for it indulge in these activities simply for fun.

On Thursday afternoon news broke out on Twitter that actor Morgan Freeman had passed away in his Burbank home, California. The news was an outcome of a re-tweeting as was evident on the site due to “RT” written before the actual statement. The incident is all the more shocking that the one who had actually posted the news mentioned that the news of the actor dead was originally reported by CNN. It was absolutely shocking as to how could a well known media house like that of CNN issue out such a hoax. However, when questioned on this CNN spokespersons simply refuted the allegations saying that no way can they do something like this.

It is not hard to guess that the hoax of Morgan Freeman being dead is actually a prank. CNN has clearly said that they will be investigating the matter and find out how such base allegations against them sprung up. Yesterday after one user posted the news, several others followed it and through these re-tweeting the false death news of the actor spread like fire through the entire networking site.

OAKLAND (GaeaTimes.com) For the people who had died in the Jonestown tragedy, a memorial service...