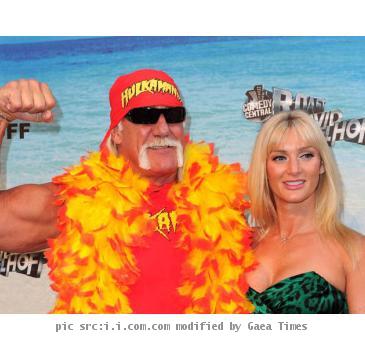 CLEARWATER BEACH (GaeaTimes.com)- Veteran wrestler Hulk Hogan wed married fiancee Jennifer McDaniel at his home in Clearwater, Florida, on Tuesday. Only close friends and family members of the couple attended and blessed the couple on their wedding. However, things took a different turn when a brawl broke out between Hulk Hogan’s bodyguard and a photographer named Robert Martinez.

Eyewitnesses reported that Hulk Hogan’s security team was embroiled in a war of words with the photographer, who was attempting to take pictures of the couple. The couple kept a low profile wedding away from paparazzi glares and hence Hulk Hogan’s security chief Ron Howard tried to stop him from taking pictures. However, the verbal fight turned into a brawl and the wrestler had to call police to end the fight. On the other, the Clearwater Police department said that no one was arrested in the event though the photographer, reportedly, filed a complaint.

After the wedding, Hulk Hogan took to Twitter to speak his mind and share his disappointment with his fans. He wrote in his homepage that he did not expect that such an incident would take place on his wedding day. He described the incident as a “crazy” one. However, later he tweeted his platinum and diamond plated marriage band’s photo and wrote that he and his wife would create a history of love this time. Jennifer McDaniel later said that the video shows the photographer’s hand on Ron Howard’s throat. However, Hulk Hogan’s daughter Brooke reportedly attended the wedding and his son Nick was the best man of the event. The American wrestler was previously married to Linda Bollea.

WASHINGTON - Reports are abuzz that wrestling legend Hulk Hogan is all set to wed his 35-year-old fi...

LONDON - Scottish singer Susan Boyle has revealed that when she gets angry she turns into the Incre...

LONDON - Hollywood actor Mark Ruffalo said he is thrilled to be playing 'The Incredible Hulk' in upc...

LONDON - World wrestling champion Hulk Hogan is in "a lot of pain" after undergoing his second back ...