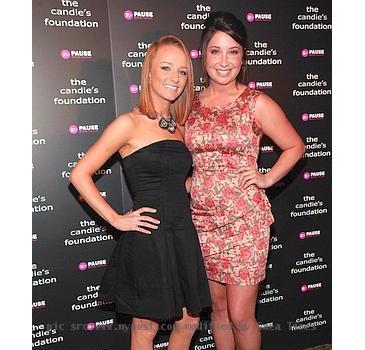 LOS ANGELES (GaeaTimes.com) — MTV’s “16 and Pregnant,” which was spun off into “Teen Mom” gives a chance to single mothers to share their experience and struggles. This is the show where Maci Bookout meets her new BFF Bristol Palin.

Maci Bookout, 19 is the single mother of 21-month-old son Bentley. She had a tough fight with her estranged boyfriend Ryan Edwards, who is also the father of the baby boy.

I feel like Maci and I have the same situation

The single mothers duo met at the Candie’s Foundation Event last May. They were spreading awareness against Teen Pregnancy at Cipriani 42nd street.

We talked about experience we’ve shared

Bristol, who is now competing on “Dancing With the Stars” said,

The other day I saw an episode of ‘Teen Mom,’ and then I texted [Maci], saying, ‘Oh my gosh, I totally went through the exact same thing!

Maci, on the other hand is now staying at Nashville at the vicinity of her new boyfriend, her childhood pal, Kyle King. She says, Edwards has started to be a father and taking responsibilities of their son. He shares custody of Bentley on Wednesday and Thursday nights and every other weekend.

Ryan will text me, ‘Can you send me a picture of Bentley?’

And Ryan’s enjoying the work part, too, changing diapers and giving [Bentley] a bath

Maci and Kind are planning to get married eventually but they are in no rush.

SAN FRANCISCO (GaeaTimes.com)- The shoppers are waiting for Black Friday and with almost all of ...

LOS ANGELES, (GaeaTimes.com)- "For Colored Girls" has been released today. The film is the adaptat...

WASHINGTON - Pregnant Mariah Carey's husband Nick Cannon has requested her to bid adieu to her fam...

Black Friday 2010 is just knocking at the door. Black Friday heralds the beginning of Christmas shop...

Teen voice of 'Dora The Explorer' sues NickelodeonNEW YORK — A teenager who gave voice to the spun...