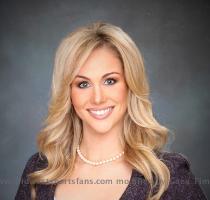 DALLAS (GaeaTimes.com)- All those girls, who were hoping to date the hunky Cowboy Quarterback, Tony Romo, would now have their hearts broken, as the player reportedly got engaged to her girlfriend Candice Crawford on Thursday in Dallas. She is a sports journalist, and therefore, he would pay no heed to the rest of the women now, as getting engaged to Candice Crawford translates to getting publicity for free.

Reportedly, the couple were celebrating the 24th birthday of Candice Crawford in a restaurant in Dallas, and the player could no longer resist the temptation of owning her forever. As a result, they got engaged right in the restaurant. A friend of the quarterback said that he is ready to take the next step. Candice Crawford has been Miss Missouri few years back. At that time no one knew, that she would become a renowned sports journalist for KDAF-TV in Dallas and would drive Tony Romo crazy for her. An insider has even reported they will soon move in together. According to the source, Tony Romo is also planning to ask her for marriage soon. Nevertheless, it seems that they are very much in love, even if they are not engaged. However, the media has noticed that the player himself is trying to keep his relationship a bit inconspicuous this time, unlike his previous courtship with Carrie Underwood and Jessica Simpson, that terminated in a few days.

However, Candice Crawford And Tony Romo have still not decided anything about their marriage. Even their engagement came up as a surprise to not only their fans but also to the couple themselves. Whatever the matter is, it seems that both of them would make a happy couple, having a lot in common, with love for sports as one of them.

All looks bright for US women's basketball teamKARLOVY VARY, Czech Republic — When Geno Auriemma a...

LONDON - Unlike many of us who do not pay attention during a routine safety demonstration aboa...

US cruises into worlds semis with rout of SKoreaKARLOVY VARY, Czech Republic — The U.S. women's ba...

NEW YORK - Heidi Klum is quitting Victoria's Secret after 13 years and won't be walking in the Novem...