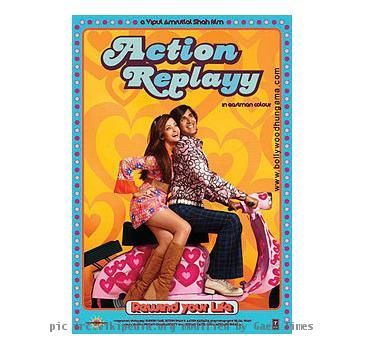 MUMBAI, INDIA (GaeaTimes.com)- Yesterday two of the much awaited films of the year namely ‘Golmaal 3′ and ‘Action Replayy‘ hit the theaters in India. The latter starring two of the most sought after actors of Bollywood - Akshay Kumar and Aishwarya Rai Bachchan is a sci-fi comedy with a twist in the plot. In this film Aditya Roy Kapoor plays the on screen son of the actors and he tries to mend the troubled marriage of his parents played by Akshay Kumar and Aishwarya Rai Bachchan by taking the help of a time machine devised by his grandfather. The plot does sound interesting but the director in his attempt to combine and experiment with so many elements ends up making a film that does look different but could have been made much better. The Retro part is the USP but some of the viewers feel it has been overdone.

In ‘Action Replayy’ actor Akshay Kumar plays a nerd who metamorphoses into a hot dude. However,it is rather similar to his performance in Jaan E Mann. As for actress Aishwarya Rai Bachchan she looks gorgeous and attractive even at 37 but does not have much to do besides that. The powerful actors like Kirron Kher and Rajpal Yadav do not have much to do and they have been wasted in minuscule roles.

The film ‘Action Replayy’ is adapted from a Gujrati play having the same name. It is hard to say how it will fare at the box office. The other release of the week ‘Golmaal 3′ has got a better opening. However, in the next week its collections may soar.