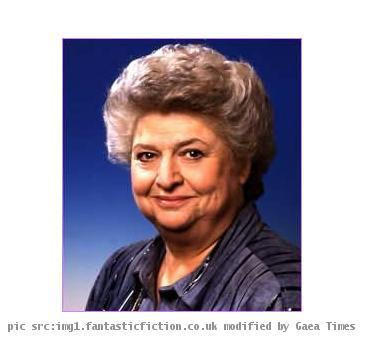 LONDON (GaeaTimes.com) — Britain today mourns the loss of famed writer and broadcaster Claire Rayner, who dies yesterday. Claire Rayner aka Agony Aunt breathed her last breath in her home in north-west London. She was 79.

Before her death, Rayner left a message for the Prime Minister. She wrote,

Tell David Cameron that if he screws up my beloved NHS I’ll come back and bloody haunt him.

Rayner went through serious intestinal surgery in May, but didn’t recover since then. She died in a hospital, near her home in Harrow.

The eminent figure was best known for her daytime television phone-ins. She also penned for the Sun, Sunday Mirror, Woman’s Own.

Her husband of 53 years, Des Rayner said,
I have lost my best friend and my soulmate. I am immensely proud of her.

Mr. Rayner also added that Claire helped thousands through her work. She used to discuss about safe sex in the 80s, when nobody else would indulge into the issue.

Claire Rayner, who was a former nurse had overcome breast cancer at the age of 70. She was later awarded with the OBE for “services to women’s issues and health issues” in 1996.

She was associated with 50 charities and was a member of the Prime Minister’s Commission on Nursing. Besides, she was the vice-president and former president of the British Humanist Association (BHA).

Claire Rayner found meaning and inspiration in living and the enjoyment of life, in trying to fulfil her potential, and in the wonders of nature and the marvels of the cosmos.

She was a remarkable woman with broad interests and deep sympathies who lived an exemplary humanist life and we all feel lucky to have known her and to have had her support for so many enjoyable years.

We, at Gaeatimes express our sincere condolences to the bereaved family and friends of Claire Rayner.