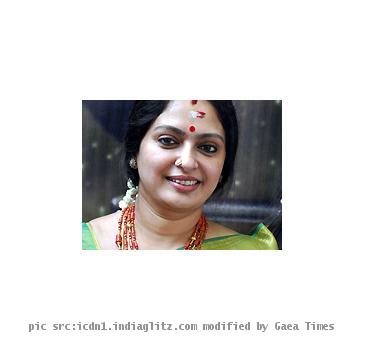 CHENNAI, INDIA (GaeaTimes.com)- Tamil Television’s popular actress Seetha got married with TV actor Sathish in Chennai but the event was deliberately kept a low key affair. Sathish is also her long time buddy. The marriage ceremony was attended by her close relatives and parents. However, this is not the first time the actress is tying the knot. She was earlier married to actor-director Parthiban but owing to differences of opinion that marriage did not work out. After her divorce Seetha started focusing on her career again. She acted in key roles in some Tamil TV serials and her performance brought her fame and accolades. Till date she has acted in a number of serials which have made her a household name.

Seetha met Sathish in one such serial as it has been found. They began good friends initially but later the friendship turned into love. They decided to tie the knot and the family members happily agreed to the match. Actress Seetha said after getting married for the second time that she is sure Sathish will be the perfect man for her. She added that they share a great comfort level and compatibility. Seetha earlier acted in films but later chose television as her career.

Actress Seetha who married friend and actor Sathish has three kids from her first marriage. The kids stay with her first husband. Reportedly, the duo had been living together for some time. The friends and family members of the actress are happy as she is settling down after years. Hopefully, she will not stop acting after her marriage.

MELBOURNE - Teri Hatcher has dismissed reports that she has quit the hit TV series 'Desperate Housew...
Copyright© 2010 The Gaea Times