Queen Latifah Comes Out Of The Closet? 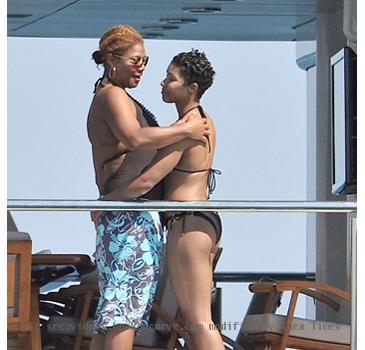 LOS ANGELES (GaeaTimes.com)- Highly acclaimed American actress and rapper Queen Latifah has seized attention with certain pictures that have surfaced showing the “Chicago” star getting cozy with her friend and fitness trainer Jeanette Jenkins. The noted actress and her friend are spending quality time with each other at a luxury yacht across the coast of France. The pictures showcasing the “Beauty Shop” star sharing a warm hug aboard the luxury vessel has once again sparked rumors regarding the sexuality of Queen Latifah with some rumor mongers claiming that with the eye-catchy snaps the actress has finally come out of the closet.

Speculations have been abuzz since the intimate pictures featuring the two ladies have been released recently. The pictures have been successful in gaining more mileage as Queen Latifah has been linked to her fitness trainer in the past although the award-winning actress has always been tight-lipped about their relationship. However, the sizzling chemistry that the two share is quite palpable from the recently unveiled pictures in which Queen Latifah and her female companion get close with each other and also help each other cover up with sun tan lotion.

The pictures were taken in the luxury yacht in which Queen Latifah and her fitness trainer friend are accompanying the would-be-parents and the newly-weds Alicia Keys and Swizz Beats who are on their honeymoon. Apart from the pictures which have fueled the rumors that Queen Latifah has finally come out of the closet, the 40-year-old actress and rapper has also been pictured with Alicia Keys who is seen adorning a white bikini showing off her baby bump.