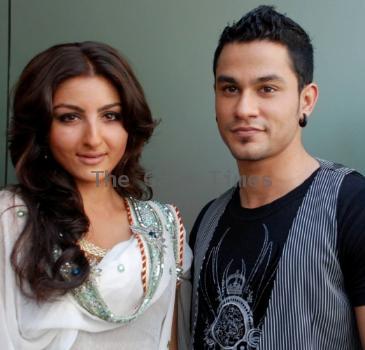 July 28, 2010 (Sampurn Wire): Putting all rumors to rest, Soha Ali Khan and Kunal Khemu have actually gone ahead and confirmed about their status as B-town’s newest couple.

The couple was noticed at the Delhi Fashion Week, and they didn’t seem to hide anything pertaining to their relationship. Khemu said that the two were never hiding anything regarding their relationship from anyone, but declared about it after they both became sure about the feelings for each other. Khemu also said that previously they have done films together, however during that time they weren’t in a relationship.

The couple says that they like to give each other space and work things out, since the whole concept of a relationship is pretty complex.

Seemingly, Soha and Kunal are pretty serious about the relationship. In fact, Kunal has already met the Khan Khaandhaan twice.

He proclaims that he’s a big fan of both Sharmila Tagoreji and Pataudi Saab, Soha’s parents. He believes that they symbolize the summit of the two religions of the nation: cinema and cricket. Almost to show that she’s not far behind, Soha has also gone ahead and met his beau’s parents.