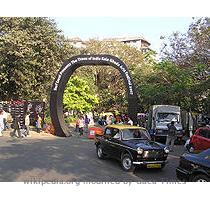 MUMBAI, INDIA (GaeaTimes.com)- The art aficionados ultimate treat, the Kala Ghoda Festival 2011, is taking place in Mumbai with much elan. The nine-day long festival which kicked off late last week, is the ultimate paradise for art-lovers who are attending the gala event in large numbers to soak in the splendid art works on display. Many prominent personalities from the art fraternity have graced the festival since it was inaugurated few days ago and throughout this week, the event is likely to witness the presence of who’s who of the world of entertainment, dance as well as music.

While singer Rekha Bharadwaj took the venue by storm with her mesmerizing rendition of Sufi music recently that left the audiences asking for more, actor Gulshan Grover was one of the celebrities who was also spotted having a gala time at the Kala Ghoda Festival 2011 recently. The ‘Bad Man’ of the Hindi film industry was seen thoroughly enjoying the performances by street dancers before taking a look at the photographic exhibits on display. At the same time, artist Bose Krishnamachari was also spotted at the festival along with his family, visiting the different stalls while enjoying himself to the fullest.

Apart from the sub-festivals including visual arts, cinema, drama, music, literature, to name a few, Kala Ghoda Festival 2011 also boosts of as many as 100 additional events that are the highlights of this year’s festival. At the same time, the event organizers have reiterated that the variety of programs that have been arranged this year are distinct as it involves everything from heritage works to workshops.