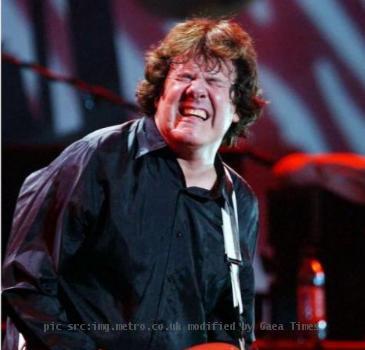 LONDON (GaeaTimes.com)- Notable guitarist and blues rock musician Gary Moore passed away on Sunday while he was on a holiday in at the Kempinski Hotel in Estepona, Spain. His former manager Adams Parsons announced the news to the media. However, the cause of his death is still unknown. Gary Moore’s family has not yet announced the funeral arrangements of the musician. He was 58 year old.

The official website of Gary Moore also confirmed the mews and in the statement it was stated that the musician passed away while he was on a holiday in Spain. The statement also read that the thoughts and prayers of all music lovers are with his friends and family as they go through this difficult time of their life. Eric Bell, the Northern Irish rock musician and guitarist expressed his condolence at the sad demise of the musician and said that he is still unable to believe that Gary Moore has passed away. Eric Bell said that Eric Bell was a “robust” musician and a healthy musician. He also praised Gary Moore by saying that he was an outstanding guitarist and a “dedicated musician”.

Brian Downey, one of the founding members of Thin Lizzy band also expressed his shock and said that Gary Moore’s death is unbelievable. Scott Gorham, the guitarist of Thin Lizzy band said that performing with Gary Moore during the “Black Rosa era” was a great experience and the musician was a great guitar player. Scott Gorham also added that he would miss the “She’s My Baby” musician. The spokesperson of Foreign Office in London also said that the office would provide “consular assistance” to Gary Moore’s family.

Fact Sheet on the United States' Relationship with the European Union: An Enduring Partnership

No progress on rescue for 29 trapped in mine

WELLINGTON - Families of 29 men trapped underground after an explosion in a New Zealand coal mine fa...

NEW YORK - The world's most expensive website 'Sex.com' has been sold for a whopping 13 million doll...