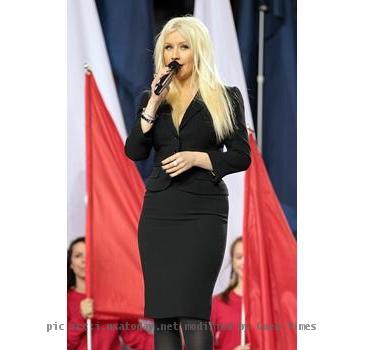 ARLINGTON (GaeaTimes.com) - Much anticipated, much touted and much gested Super Bowl XLV kicked off last night at Cowboys Stadium in Arlington, Texas. The gala opening ceremony witnessed who’s who of the American music industry, who performed to encourage the players and entertain the audience. “Glee” star Lea Michele performed the wonderful song “America the Beautiful” before the audience and just after that American singer Christina Aguilera took the stage to perform the national anthem of America. However, the singer was left embarrassed when she muffed the lyrics of “The Star-Spangled Banner”! The audience who watched her at the stadium as well as people at home, who watched her on television, were left confused when the “Burlesque” star made such a grave mistake.

In the Super Bowl XLV opening ceremony, Christina Aguilera was given the excellent opportunity to sing the national anthem of America. However, to the shock of all the Americans, the singer changed the lyrics of the song, while performing it on stage. Instead of singing “O’er the ramparts we watch’d, were so gallantly streaming”, Christina Aguilera completely changed the lyrics and sang “What so proudly we watched at the twilight’s last reaming”. The mistake of the singer has left the whole country abuzz with criticism. An eyewitness told a reputed media outlet that this was one of the biggest opportunity and performance in her life and she completely “blew” it.

For the critics, it was a disaster on Christina Aguilera’s part to mess up the lyrics. The Super Bowl XLV was played between the Pittsburgh Steelers and Green Bay Packers where the latter defeated the former with 31 to 25 score. Neither Christina Aguilera nor her representative has commented anything about the national anthem issue.