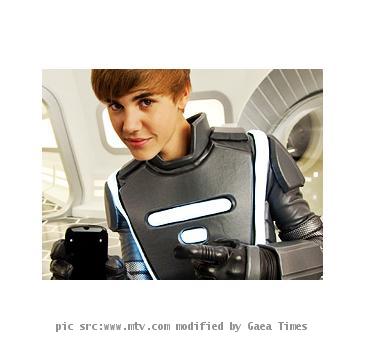 LOS ANGELES (GaeaTimes.com)- Super Bowl seems to be the perfect time for the companies to publicize their products and at the same time many renowned faces of the entertainment industry are grabbed attract attention of the audience. Teen sensation Justin Bieber and rock legend Ozzy Osbourne has teamed up together to endorse the products of consumer electronics company, BestBuy. The giant company has made their debut in the commercial world through this ad. The audience liked the plot and chubby faced Justin Bieber in the ad and in no time, it had received good response from the audience.

In the Super Bowl commercial, it seems that the “Baby” singer confuses Ozzy Osbourne and his wife Sharon Osbourne when he answers them back saying that he does not know who Justin Bieber is. The singer goes onto a complete image makeover as he dons a dress of a crew, with a face full of beard and less hair in the head. Justin Bieber, then tells Sharon Osbourne that he feels Justin Bieber looks like a girl! The commercial is a complete entertaining one as the singers manage to tickle funny bones of the audience with their quick written dialogue.

The BestBuy commercial has a “Tron” like futuristic background and initially both Justin Bieber and Ozzy Osbourne are seen in an astronautic dresses. The press release of the commercial stated that it is aimed to show the “creativity and humor”, to the millions of football fans throughout the country. Even they senior vice president of the U.S. marketing at Best Buy, Drew Panayiotou said that the company officials are delighted to have Ozzy Osbourne and Justin Bieber in their Super Bowl commercial.

LOS ANGELES (GaeaTimes.com)- It was a night of grandeur, felicity, glamor and fanfare at the...
Copyright© 2011 The Gaea Times