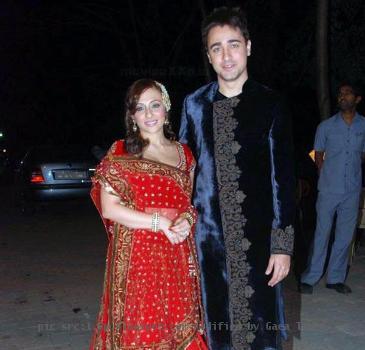 MUMBAI, INDIA (GaeaTimes.com)- The reception of young Bollywood heartthrob Imran Khan took place yesterday at Bandra’s Taj Lands End. It was a star studded event as anyone can imagine and the host was the uncle of the rising actor, aka iconic Bollywood hero Aamir Khan and his director wife Kiran Rao. The power couple of Bollywood had invited huge number of guests from the industry and there were a lot of politicians and leaders in the invitee list as well. Aamir Khan along with his spouse reached the venue of the reception at the earliest to ensure everything was in place.

For newly weds Imran Khan and his wife Avantika Malik nothing could be better than this. A number of Aamir Khan’s co workers in Bollywood turned up and even yesteryear’s actors like Dev Anand and Dilip Kumar made their presence felt at the event. The shutterbugs were in action and reporters from all leading TV channels and media entities were present there. A number of actresses whom Aamir Khan has wooed on screen including Juhi Chawla and Rani Mukherjee, attended the wedding reception. The bride put on her dazzling smile while Imran Khan seemed a tad shy.

Imran Khan tied the knot with his long time lover Avantika Malik recently and the marriage also hogged plenty of media attention. Aamir Khan and Imran Khan both chose black attire for the reception. When ace cricketer Sachin Tendulkar came to the venue, he was greeted with a thunderous roar. However, Salman Khan who was expected to patch up his rivalry with actor Shah Rukh Khan did not do so. He came and made a hurried exit.

MUMBAI - Bollywood actors Deepika Padukone and Imran Khan launched an apparel line as part of a ...