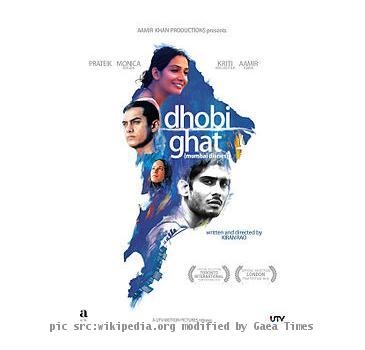 MUMBAI, INDIA (GaeaTimes.com)- ‘Dhobi Ghat’ the Bollywood directorial debut of Kiran Rao is hogging the headlines nowadays and the film is getting released all over India today. The film has hogged the attention of the media for a number of reasons. Not only this film marks the Bollywood debut of Kiran Rao as a director, it has been made under the banner of Amir Khan productions. Any film or project associated with the versatile talented actor is bound to hog attention. Apart from that it also has Prateik Babbar in a pivotal role. However, the first time director roped in two fresh faces for playing the female leads and one of the dbutante actresses is Monica Dogra. She plays the role of a NRI in Mumbai who is on a sabbatical.

Kiran Rao said on casting Monica Dogra in her Bollywood debut film ‘Dhobi Ghat’ “When we tested Monica what was really great about her was that she really was the character. She fit the role like a glove.” The pretty lady said in an interview that she has always admired Amir Khan as an actor but never thought that one day she will get the chance to act with him in the same film made under his banner. She said that her background in theater helped her in preparing for the role to an extent. She also said that it was not hard for her to relate to her character Shai.

Monica Dogra said that Kiran Rao helped her in getting into the skin of the character in ‘Dhobi Ghat’ without being interfering. However, she admitted that initially she was somewhat intimidated about sharing screen space with his dream actor Amir Khan.