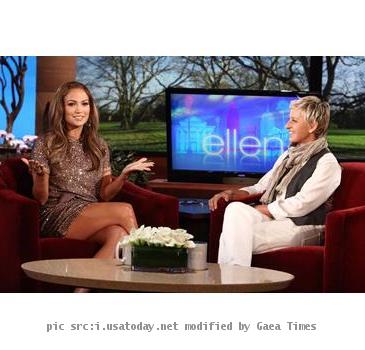 LOS ANGELES (GaeaTimes.com)- Despite the fact that Jennifer Lopez is a proud mom of her two-year-old twins Max and Emme with singer husband Marc Anthony, it seems the songstress is surely not done when it comes to having more kids. In a recent interview, the “Shall We Dance?” star revealed that she loved having kids and the entire process of pregnancy so much that she instantly wanted to have more children. The new “American Idol” judge reiterated that her thoughts about getting pregnant again has not changed over the years while adding that she would indeed to super excited to further expand her family.

The 41-year-old singer/actress made an appearance on “The Ellen DeGeneres Show” earlier this week in which when asked about whether she intends to have more children, the ‘If You Had My Love’ singer said that as soon as she delivered her twins in the year 2008, she felt, ”I want to do this a thousand more times.” While in conversation with Ellen DeGeneres, Jennifer Lopez also went on to say that although it has been three years since her kids were born, she still feels excited at the prospect of having more kids and added that she would indeed be extremely happy to be pregnant again.

Jennifer Loper and her kids created quite a stir sometime back when they appeared in a Gucci campaign for children’s clothing. While talking about her two children, the noted singer earlier on revealed that her daughter Emme is already quite conscious about what she wears while son Max likes to run around in the house without any clothes on.