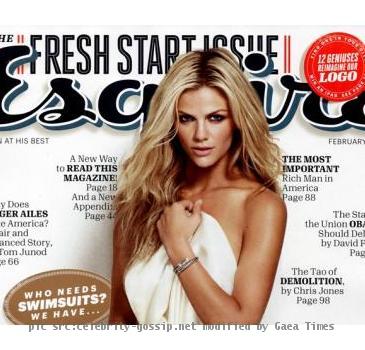 LOS ANGELES (GaeaTimes.com)- Brooklyn Decker, tennis star Andy Roddick’s wife not only amazes her husband with her sensuality, but also the other men in the town. With a perfect body and seductive eyes, she will be featured in cover page of the popular “Esquire” magazine, for its February edition.

Andy Roddick’s wife, Brooklyn Decker has been the fantasy of several men, as she is not unknown to the regular “Sports Illustrated” magazine readers, where she often poses with her skimpy bikini and tremendously hot bod. However, in her latest photoshoot with “Esquire”, she decided to shed off her minimal clothings too, but that did not look vulgar on her at all. She enigmatically covered all her assets, with nothing but a white bed sheet. That would leave the readers with an aura of mystery. This picture may be termed as more titillating than the rest of her bikini clad photo shoots, as here she wears nothing, but still covers them all. She sensuously exposes her best features, like her toned legs, curvaceous waist and shapely arms, while modestly covering the frontal parts of her torso.

However, the photoshoot was not all that made Andy Roddick’s wife the talk of the town this season. Recently, she has also acted in a film, that also stars two of the biggest Hollywood superstars, Adam Sandler and Jennifer Aniston. Entitled as “Just Go With It”, the film is set to hit the screen this February. With her “Esquire” edition that would also be released in the same month, it seems that the second month of this year would definitely be a lucky charm for Brooklyn Decker!

NAGPUR - Rahul Dravid struck a classy 191 as India declared their first innings at 566 for eight and...

PANAJI - Pakistani women will love her in "West is West" because she represents them in the film, ac...
Copyright© 2011 The Gaea Times