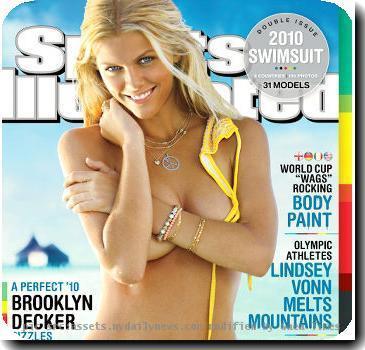 LOS ANGELES (GaeaTimes.com)- Brooklyn Decker, celebrated model and the wife of tennis star Andy Decker, graces the cover of the latest issue of the “Sports Illustrated” magazine, titled the “Sports Illustrated Swimsuit Edition 2010.” The edition was unveiled at the “The Late Show With David Letterman,” by the host himself. For a while, the spotlight shifted from the tennis star, who generally hogs most of the limelight, and from the look of things, it would remain trained on Brooklyn Decker for some time to come now, considering that the 22-year-old model is looking ravishing on the cover.

The unveiling of the “Sports Illustrated Swimsuit Edition 2010″ at the “The Late Show With David Letterman” was a fun filled affair, with the host giving an initial scare to the audience. David Letterman initially unveiled a picture of a nude Scott Brown, on a fake billboard. However, then he removed the covering from the billboard of the Sports Illustrated magazine, showing Brooklyn Decker scorching up the show in a yellow bikini.