Renee Bargh Is The “Lovely Lady Of The Day” 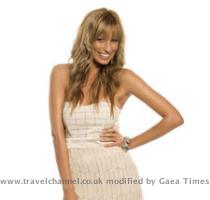 SYDNEY (GaeaTimes.com)- Renee Bargh, an Australian television host and Extra TV correspondent may not be a household name. Yet, her beauty and spark has been identified by Sports Illustrated and she has been maned ‘Lovely Lady of the Day’.

However, the ‘lovely lady’ had no clue that she has been regarded a the Lovely Lady Of The Day, until someone on tweeter told her about it in the website. She was not only taken aback by the news, but was also wondering what is “Lovely Lady Of The Day” all about. Renee Bargh earned her name from the famous Australian show “What You Want” and “Surfari”. She has also been one of the extra television corespondent in the recent American Music awards, that took place in the beginning of this week. However, she became the hottest search on the net after her interview with ‘From Paris with Love’ star, John Travolta. The interview was a the success of her life so far, and the star told her about the impeding birth of his son, whom he is planning to name Benjamin. She has also appeared in several television commercials and some high profile modeling assignments and dance programs.

Considering her age, and her new entry to the Australian television at a young age of 24. But no wonder, it seems that she is where to stay, with a interview with one of the biggest superstars like John Travolta in the very initial part of her career. Her appearance in the American Music Awards also gave the international recognition, that any television personality will crave for. The Awards Ceremony gave her the first opportunity to visit United states and Los Angeles. The experience was too overwhelming for Renee Bargh, whose excitement was intensified when she met Justin Bieber, whom she has always admired.